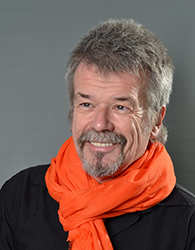 Hans-Georg Pagendarm discovered his love for photography as a teenager. As a student he bought a single-lens reflex camera – which accompanied him on his long-distance travels – from the first money he ever earned. The equipment grew quickly: soon projectors for multi-vision lectures and a separate darkroom for processing colour photos were added. Thus, he became an autodidact in all aspects of photography at an early age.

As a mechanical engineer with a doctorate, his work as a scientist brought him into early contact with the changing world of computer graphics in the 1990s. He developed new methods for the virtual representation of physical phenomena in images and animations. This earned him a position as a media professor at the HTKW in Leipzig in 1999. However, he did not take up the post for family-related reasons.

As a photographer, he turned his back on analogue photography in 2003 and has been working with digital cameras (preferably Nikon) ever since. Since the advent of social media, he has been publishing his work there under the pseudonym Hage Page. Together with other regional photographers he exhibited in the Göttingen City Library in the spring of 2020.